The year 2017 passed by and we all can say it was the period of cryptocurrencies. People of all income levels, brokers and banks, state unions and nations looked down to the phenomenon Bitcoin. The rollercoaster ride of the value for one Bitcoin went from $1000 up to $20000 in twelve months. But the question remains unanswered, who actually accepts Bitcoin?

First of all, we need understanding for the dynamics of a cryptocurrency. People are on one hand side confused because they don’t understand why something can gain the value of times 20 in such a limited period of time. On the other hand, they look closely into the full angles of the Bitcoin.

Bitcoin was the first cryptocurrency widely traded all over the world. The thought of considering no bank behind it, no national security and no Wallstreet manipulation was the driver for the success in the private sector. This was maybe also the driver for all the antagonists out there who exactly claimed the risk in Bitcoin.

But to be honest, the success came and is there because it reached acceptants. We can see in the private sector that people converted their money to bitcoin for savings. Our daily life obliges us, to take care of our bills and everything we consume. So the question remained open, who actually accepts bitcoin for payment?

You would be astonished who shows up in the infographic. Big blue chips like DELL, Amazon or T-Mobile are on the list and ready to accept bitcoin.

Our friends from 16Best.net put this infographic together of nearly over 200 companies accepting Bitcoin as payment.

While in some countries restrictions exist which tolerates people to use Bitcoin for trade but don’t allow them as payment. The number of countries which state it as illegal is minor. Also in 2017, China signaled a move to declare Bitcoin as illegal. Due to the activities of largest Chinese banks, they decided to move ahead to still allow trading with bitcoin which forced China to rethink the policy. The mission has gone so far that China announced an own and questionable cryptocurrency.

Companies like Shopify, Subway, and Tesla are early adopters and have fully accepted Bitcoin payments. You can pay using Bitcoin for any of their products or services. Nevertheless, don’t think if a company doesn’t support Bitcoin you can’t utilize them. There are some creative methods to purchase their best products with it. For example, Gyft.com will assist you to buy Nike shoes with Bitcoin, while Expedia has embraced this cryptocurrency altogether.

We learned to use online wallets and credit cards to convert traditional money to Bitcoins and we have seen also that ATM reached the market. They collect your cash, and you receive your barcoded hashcode slip with your transaction into your Bitcoin wallet.

In 2017 a couple of MLM programs surfaced and many people trapped into the method of quick money. By end of 2017, some of them disappeared from the market again and 100.000 of people vanished their money in the galaxy of the internet.

See the full detailed infographic below, who accepts bitcoin, you will be amused. Share your thoughts with us, have you use bitcoin? Do you own a wallet, use the commenting below. 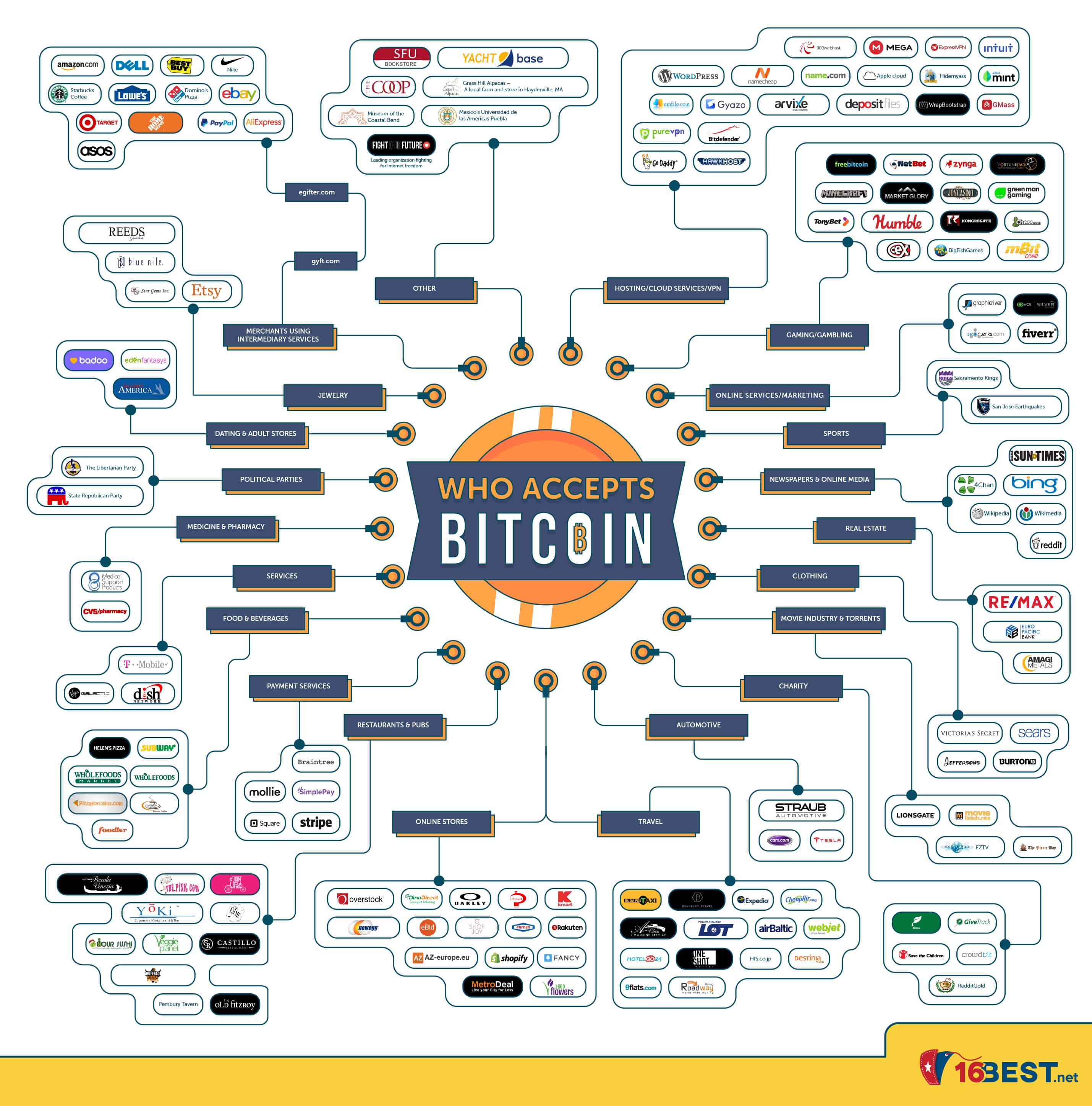