Spoken Languages of the World [Infographic]

Have you ever wanted to learn a new language to help you travel the world or gain new career opportunities? See below the most spoken languages of the world in an infographic.

This infographic prepared by Zamenhof translations shows you the 10 languages which are spoken in the most countries around the world.

In the lead of spoken languages is, of course, Chinese (Mandarin )followed by Spanish and English. In the top ten, you can find languages like Hindi, French, Arabic, Portuguese, German, Russian, Bengali, and Portuguese.

Looking at the world wide web it is interesting to know how many pages are present in which language.

There are also some interesting facts which we can learn about other languages.

The USA – The United States of America has no official language

AFRICA – Africa is the home of more than 2000 languages

TAMIL – is a language with about 247 letters

Below the infographic, you can see all the details too of facts about most spoken languages.

Cost of Learning a Language

Curious about what it could cost to learn any of these languages?

As a guide, we calculated the number of hours and cost per hour required to learn each language. As you can see, the difficulty of a language doesn’t mean it costs more to learn. Even though it takes more hours to learn Malay than say, Portuguese, its cheap hourly cost makes it an economic choice.

For those of you who are really ambitious and don’t mind spending money, Chinese is one of the most difficult languages and is by far the most expensive to learn! 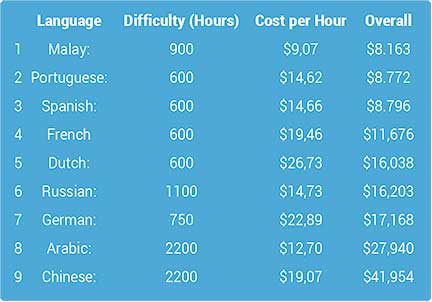 What is a Language ?

Language is the ability to acquire and use complex systems of communication, particularly the human ability to do so, and a language is any specific example of such a system. The scientific study of language is called linguistics. Questions concerning the philosophy of language, such as whether words can represent experience, have been debated since Gorgias and Plato in Ancient Greece. – WIKIPEDIA